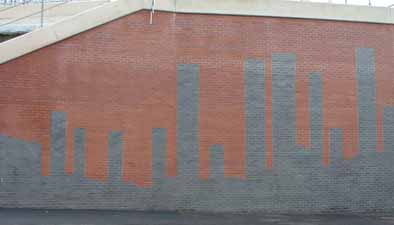 Sandwell Metrolitan Borough Council were keen to involve the local community in this project which was funded partly by the local Transport Plan and partly by Network Rail.    Birmingham City University architecture students were approached with a design competition to come up with a pictorial idea for the brick facing of the underpass.  The winning design was a typical local black-country historic industrial skyline, of heavy industry and canals, made in Staffordshire blue and Staffordshire red brick.  On one side of the road the red brick forms the buildings while the blue brick makes up the skyline.  On the other side of the road, this is reversed, to create the night time version where the blue brick forms the buildings and the red brick represents the industrial glow of the night sky.   The tunnel was opened in January 2010 by the regional minister for the West Midlands, Ian Austin.  He said, “I am very proud to see locally produced materials create such a great piece of design that thousands of people see everyday.”