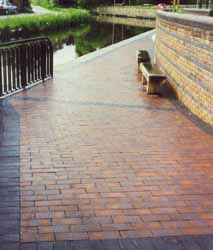 Ketley plain pavers were chosen in a joint redevelopment with Birmingham City Council of an area of Birmingham’s canal system, which subsequently became known as Canning Wharf, because of the ability of Ketley Brick to manufacture paving bricks of outdated dimensions of 10”x5” and 12”x6”.  British Waterways were delighted with the appearance of these pavers and as a result generated a standard specification for Ketley Brown Brindle pavers to be used for all the quadrants where the lock gates are opened. This in turn led to paving large areas of towpath in the general refurbishment of the canalside in the urban environment. There are more miles of canal in Birmingham than there are in Venice, so this project became a major user of Ketley products especially during the 1990’s.  This continues to this day when sections of the canal are ready for refurbishment, although nowadays this comes under the auspices of the Canal and Rivers Trust.